Hey, @labreesbakery is giving away a free year’s subscription to their monthly bakery box! https://wn.nr/ckJvwq
END_OF_DOCUMENT_TOKEN_TO_BE_REPLACED

END_OF_DOCUMENT_TOKEN_TO_BE_REPLACED 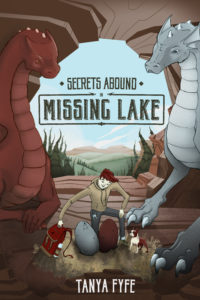 In the third book in the acclaimed teen fiction, ‘Missing Lake’ series, Luke Houser is approaching his sixteenth birthday as well as summer vacation in the tiny mountain community of Missing Lake. He continues to try to find balance between real life with friends and their social requirements with the secret world of the mystical dragons.

Luke faces challenges with one of his beloved sled dogs as well as with Zagros, the majestic silver dragon, when he has to make choices that could lead to potential disaster. As the summer unfolds, so do more secrets in all aspects of Luke’s life and he tries to make sense of everything happening around him.

This is the third book in the series which shares Luke’s awkward and yet charming journey through adolescence with his beloved team of huskies, his friends near and far, and two dragon eggs that are going to hatch in the middle of nowhere.

“This seems to be a realistic portrayal of coming of age preoccupations and trials–with the added interest of a link with dragons that must be kept secret. Dragons, humans, and sled dogs come to life with equal vividness.”-Margaret, Goodreads Review

“The very talented Dr. Tanya Fyfe does it again. In her latest installment of the Missing Lake saga, we romp through Luke’s adventures with high school, veterinary medicine, and of course, dragons. In this third book of the series, Fyfe intertwines the relationships of a blended family, teenagers, and dragons. There is a great bit of fun and just the right dose of medicine.” –Kelly Malinas, DVM, Nevada

“What fun to read books that are imaginative, well paced, varied, and knowledgeable. I plan to go buy the third in the series tomorrow.”- Margaret, Goodreads Review

“What a fun adventure Luke goes on in this book. I think his life is about to take a very big change in direction and I can’t wait for the next book.”-Cindy C., Amazon Review

“Great escape in the pages of this delightful book. Wonderful sequel. I can’t wait to read more by this imaginative author.”- Kelly N. Maclellan, Amazon Review

MY THOUGHTS:Tanya Fyfe has definitely put her heart into this book. It’s evident from page 1 that, as an author, she cares about her characters. Luke’s life is crafted in a way that is completely relatable to today’s YA audience. His unconventional family, his issues at school, even learning to drive are all things readers of this genre would be (or are) experiencing. They probably don’t have dragon friends, but, the rest is spot on.
As a parent, I appreciate that Luke is portrayed as a responsible young man. He takes pride in his work with his sled dogs, does chores, and doesn’t spend his day consumed with social media. YA readers need more ‘good’ examples in their heroes. Luke cares for his friends and family, trying his best to do right by both.
The characters as well as the plot are definitely a fresh take on dragon stories. Even though it is obviously of the fantasy genre, it isn’t so off the wall that a readers couldn’t imagine it happening. In fact, Tanya Fyfe allows her readers to fell as if the dragons could very well be next door at that very moment. That’s what fantasy books should feel like. I give it 4 stars. 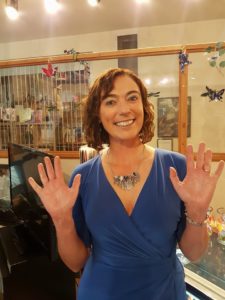 Tanya Fyfe grew up in Canada as a professional figure skater who dreamed of writing books. That dream came true when she wrote and published Lost and Found in Missing Lake in 2014. Now a veterinarian, Dr. Fyfe lives in rural western Montana and is inspired daily by the beauty around her.

She and her husband split time between Montana and North Dakota and enjoy improving their golf games and visiting Hawaii every chance they get. They share their home with charming dogs, inquisitive cats, a herd of horses, and three hilarious ferrets named Phillipa, Calypso, and Luigi.

A breeze came rushing off the mountains towards our house. I could hear it when it began and as it swept into our little meadow towards the house. I loved how you could hear the weather changing in Montana, especially with the wind. It was windy almost all of the time in North Dakota so getting to hear a solitary breeze coming towards you seemed really cool. The wind was loud enough to almost drown out the barking dogs and just about knocked me off balance. I turned towards the mountains where it came from with my eyes closed and let it seemingly blow right through me. I didn’t know why but it made me smile.
By the time the wind had moved on I realized that the dogs weren’t barking or making any noises. They were all crouched down facing the house with focused looks on their faces. That sort of thing didn’t happen in a husky kennel when the handlers were out in the pens with them. Unless there was a dragon landing in your front yard.
I turned to face the house and was once again blown away by the sheer magnificence of a tremendous silver dragon with his shimmering wings outstretched and glistening in the sun. He reached towards the same ground that I stood on with almost pointed toes and slowly lowered himself. My mouth was open even though I had witnessed both Tabitha and Zagros land before but the sight was something I didn’t think I would ever get used to. I hadn’t heard the swooping sounds of him flying because of the giant breeze that had blown through and I didn’t know how long the dogs had been lying still since my eyes had been closed. I wondered if he had been using the breeze to fly with and thought about how risky it was to come over in broad daylight but knew his lair wasn’t very far from our farm and it wasn’t like many people lived where we did, basically in the middle of nowhere.
“I used the wind as you suspected, my friend. And it is good to see you,” his powerful voice came through inside my head. He had landed completely and lowered his front arms to the ground. “Most people do not look up during strong winds such as this or they must close their eyes to avoid debris getting into them. These winds travel the world and the dragons know when they are there and we can use them for daytime travel.”
I had started to move towards him as he spoke to me without moving his mouth. The dragons could communicate with their Dragoneers in whatever language we spoke. I had made sense of if by comparing it to thought transfer. I had watched an old episode of Star Trek where they talked about thought transfer and that made sense as to how these giants from another era could speak with us. But they had to choose who could hear them or communicate back. Zagros told me that he could read my thoughts as well, that I didn’t need to speak out loud to him but I still usually did.
“I’m so happy to see you,” I said as I approached him. While he was a huge force in my life we hadn’t actually been face to face more than ten times. Zagros and Tabitha seemed more in tune to our activities and actions. It was Zagros who had saved my life when I had my snowmobile wreck.
He lowered his head towards me and I reached my arms around his neck. It had become a thing between us where it was okay for me to hug my dragon friend.
“I am pleased, as well, Luke,” came the voice inside. “I have missed sharing thoughts about our world and upcoming hatchings with you. Tabitha and I are both very excited.”
Zagros followed me as I walked back towards the dog kennel. I remembered that I hadn’t latched the door shut behind me when he appeared and then landed. Not that the dogs were going anywhere. They had their eyes glued to the dragon.
As we got closer to the kennel I heard one of the dogs growl. That was the first time I had heard that, having been out with the dogs when Zagros had appeared another time. Even Dad had been with the dogs the first time he accidentally met Zagros and nobody had growled, from what he remembered. I wasn’t sure which dog it was and I wasn’t sure how Zagros would feel but he seemed to know exactly who it was as he turned his head slightly to the side. He stared at Harry, our oldest husky, and the growling stopped. I wondered if he communicated something in dog language inside of Harry’s head.
“I did,” answered the voice. “And that will be the last growl from him.”

IF THE RAFFLECOPTER FORM DOESN’T LOAD, CLICK ON THE WORDS ‘A RAFFLECOPTER GIVEAWAY. A NEW TAB WILL OPEN!
a Rafflecopter giveaway
https://widget-prime.rafflecopter.com/launch.js

Devoted Mommy of 3: A New Beginning
Blog at WordPress.com.